Medivery is a robust automated vehicle capable of transporting and distributing medication from the pharmacy to in-patients, per schedule stipulated by the nursing staff. An autonomous robot is required in hospitals to ease the flow of events that a medical staff needs to attend to.

The transportation robot is built with a combination of mechanical, electrical and control architecture. Although the robot has a small built volume, it can be controlled by a mobile application with an extendable arm to distribute the medication right onto the patient’s desk. 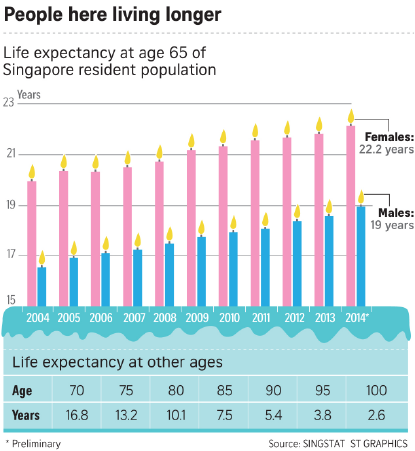 With the growing ageing population in Singapore, by 2030, one in four Singaporeans will be aged 65 years and above. The spike in the graying population also puts strain on the healthcare sector. Statistics have shown an increasing trend in the number of Singaporeans diagnosed with chronic diseases. This leads to healthcare services being in high demand and heavily relying on healthcare staff to maintain the workflow in hospitals.

Our team saw this as an opportunity to innovate and think of a way to introduce novel robotic systems that can increase the efficiency of hospital workflows.

Medivery was inspired by a current surveillance invention – 4-wheel drive robots and the autonomous delivery robot Hospi. We identified several limitations in the existing designs that are available in the market. Hospi requires additional medical staff to unload the items transported.

This is a limitation because the healthcare industries heavily rely on their healthcare staff and it is crucial to develop solutions that improve the staff’s workflow. With a fully automated service robot, it will help to boost the productivity of healthcare personnel and enable them to focus on other tasks. 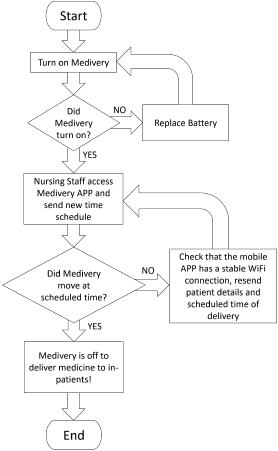 There has been extensive research and development of service robots over the past decade. The robots range from partial autonomy to full autonomy, where there is no active human robot intervention.

With this concept in mind, to develop a fully-autonomous robot, it requires a seamless communication flow of data that is transferred and retrieved from the database. The robot then undergoes path finding and navigation using the several reflectance sensors to locate a fixed path line and identify various ‘checkpoints’ to complete its task. 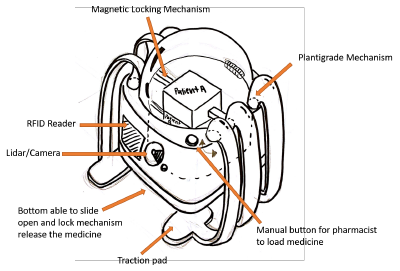 Individually, we used the REAL-WIN-WORTH IT analysis tool to evaluate our ideas and Pugh Chart to evaluate the overall team ideas. We rated each idea based on the datum product Hospi features. As a result, we decided to focus on the automated revolving shelf idea where it requires simple parts, could store large amounts of payload, cost-effective and low risk.

The robot comprises of three core aspects, mechanical, electrical and software programming. The robot contains a microcontroller (Raspberry Pi 3), 3D printed support structures, batteries, scissor lift mechanism, light sensors, motor driver and assembly and a stepper motor for the timing belt. These components are housed on a stable chassis and the weight is evenly distributed.

The scissor lift mechanism owes their mechanical capability to the pantograph where it enables the operator to elongate vertically while maintaining the structural integrity of the mechanism.

The two pantographs arranged in a “X” formation has one end permanently secured to the 3D printed holder whereas the other end is free to move horizontally when the stepper motor activates the timing belt to turn the threaded rods. The robot’s scissor lift mechanism can collapse down to 14 cm and raise up to 60 cm in height. 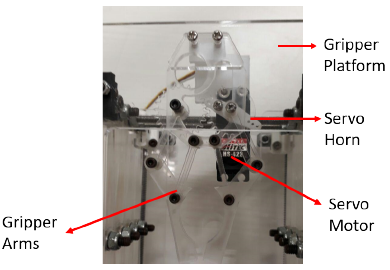 The gripper arm is mounted at the top of the scissor lift mechanism. It can pick up the payload from the revolving payload holder and is controlled by the servo motor. 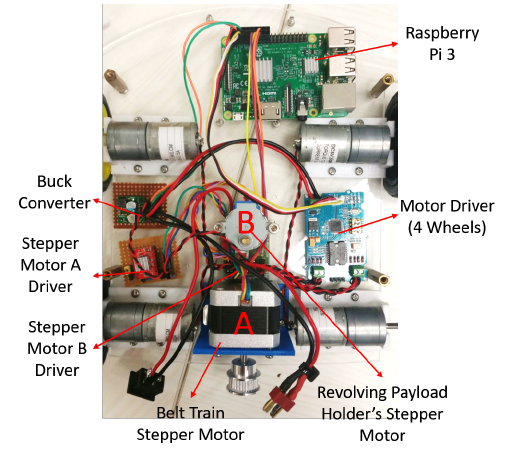 The main body holding the motors uses two 5mm acrylic plates that are laser cut. On the bottom plate, it houses all electrical components such as the raspberry pi 3, buck converter circuit board, motor driver boards and stepper motors.

The robot requires a buck converter circuit board so that components like the Raspberry Pi 3 and the motor drivers can receive only 5V to function. Hence, the buck converter is a DC-to-DC power converter that steps down voltage while stepping up current.

Additionally, the various motors present each require a motor driver. This is because the motors draw higher current and connecting it directly to the Raspberry Pi will not work as it has very low output current, insufficient to drive the motors; thereby requiring several motor drivers. 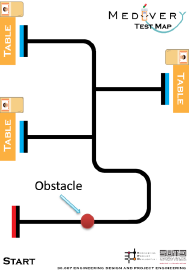 Five light sensor arrays are used in the robot. The robot can follow the line based on the designed test map.

The light sensor arrays are mounted onto the robot with a height of 8mm from the ground. Ultrasonic sensors are mounted at the front of the robot for obstacle detection. It plays a vital role in the field to detect any obstacles. 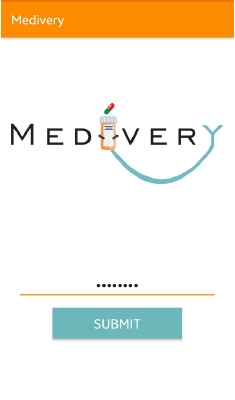 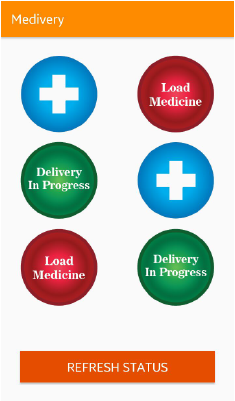 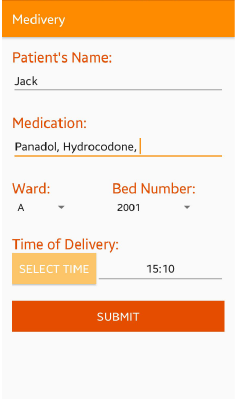